Chitkara University organized Kala Kumbh in collaboration with the National Gallery of Modern Art, Ministry of Culture, Government of India from December 25th, 2021 to January 2nd, 2022. The seven-day workshop series was organized under the “Azadi Ka Amrit Mohotsav” campaign.

Azadi Ka Amrit Mahotsav is an initiative of the Government of India to celebrate and commemorate 75 years of progressive India and the glorious history of its people, culture and achievements. It is an embodiment of all that is progressive about India’s socio-cultural, political and economic identity. The official journey of “Azadi ka Amrit Mahotsav” commenced on 12th March 2021 which started a 75-week countdown to our 75th anniversary of Independence and will end post a year on 15th August 2023.

Mr. Adwaita Garanayak, Director General, NGMA inaugurated Kala Kumbh, which was attended by artists from across the nation. Ten scrolls of seventy-five meters (14-15 ft high) each were commissioned which represented and showcased the rich Indian cultural heritage along with our unsung heroes. The scrolls reflected inherent artistic visuals pertaining to the grand celebrations of Azadi ka Amrit Mahotsav. The narratives have been a reflection of the tales of valour of unsung heroes from Ladakh, Jammu, Kashmir, Uttar Pradesh, Delhi, Haryana, Punjab, Himachal Pradesh, Rajasthan with artistic expressions reflecting the indigenous forms of art such as Phad, Pichwai, Miniature, Kalamkari, Mandana, Thangka and Warli.

Lt Gen Devendra Sharma, SM Chief of Staff, HQ Western Command also visited the campus during the event. He interacted with Dr. Madhu Chitkara, Pro Chancellor, Chitkara University and appreciated the efforts of the artists and NCC Cadets. Shri Adwaita Garanayak during briefing said that these scrolls analyse the potential of art as a means to express National pride and excellence with varied forms of art from diverse geographical locations of the country. “The celebration of true essence of Ek Bharat Shreshtha Bharat was visible in these workshops where the rich diversity of our country in its cultural aspects was witnessed while portraying the heroic lives and struggles of unsung heroes of India’s freedom movement. These have been diligently researched upon and painted enthusiastically by more than five hundred artists spread over two locations, Odisha and Chandigarh”, he added.

Shri Garanayak said, “The National Gallery of Modern Art, New Delhi has organised these workshops with the aim of amalgamating varied forms of visual and performing arts of the country to represent the true essence of unity and diversity in India. I believe that the gigantic scrolls when displayed at Rajpath will garner interest of each individual to delve deep into the history of the unsung heroes of India’s freedom struggle and would also draw attention towards the unified visual aspects of modern, indigenous and contemporary arts of India”.

The closing ceremony was graced by Shri Banwari Lal Purohit, Governor of Punjab and Administrator of UT Chandigarh. Several other dignitaries also evinced great interest in the scrolls during their visits to the workshops. Series of cultural programs were held in the evenings during these workshops, reflecting upon the rich traditions of folk and indigenous performing arts of India in collaboration with Eastern Zonal Cultural Centre and Northern Zonal Cultural Centre. In the next phase, these scrolls will be placed artistically at Rajpath for the celebrations of Republic Day, 2022. The strategic location of these scrolls would serve as an open gallery for all the citizens and it is intended to inspire people about the rich national heritage and legacy of Bharat in its true sense. 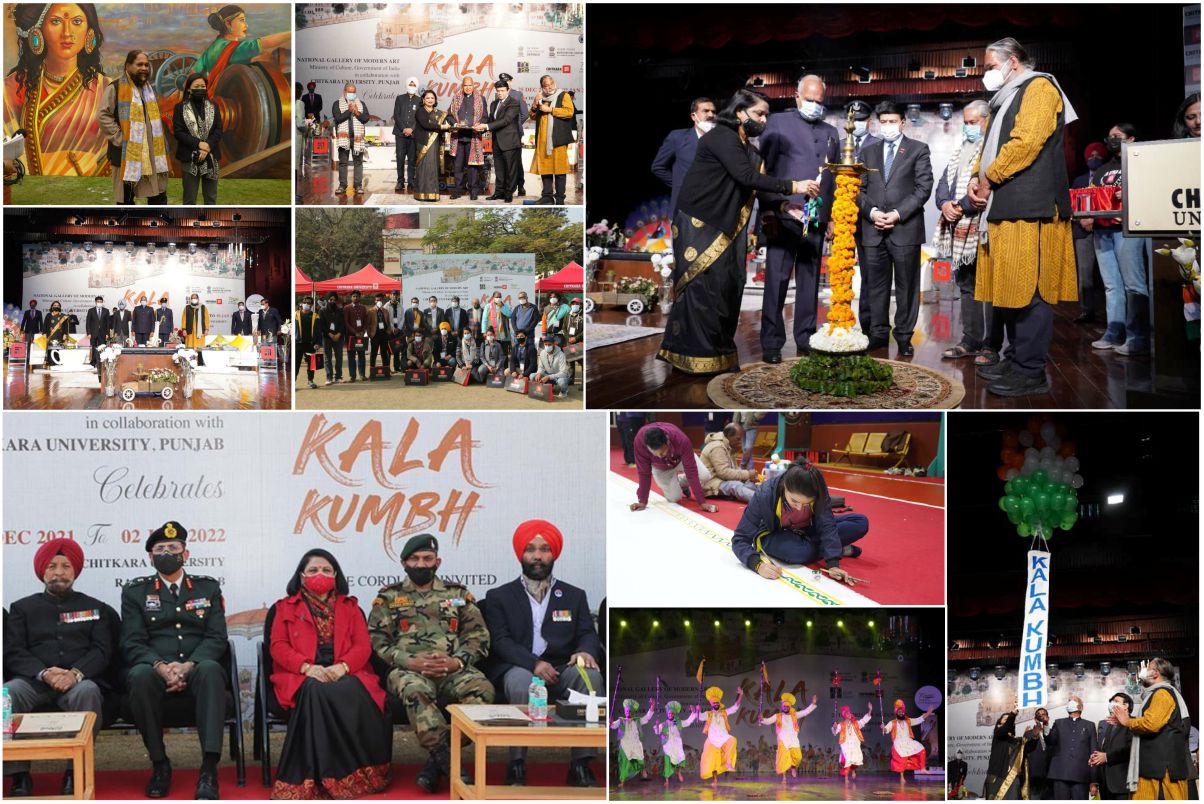