Chitkara University among “Top 10 Indian Applicants for patents from Universities” as per Annual Report 2016-17 of The Office of the Controller General of Patents, India

Chitkara University has been ranked 8th in “Top 10 Indian Applicants for patents from Institutes and Universities” as per Annual Report 2016-17 of Intellectual Property (IP) India, The Office of the Controller General of Patents, Designs, Trademarks and Geographical Indications, Department of Industrial Policy and Promotion, Ministry of Commerce and Industry, Government of India

During this financial year, 45444 patent applications were filed exhibiting a slight dip of 3.2% in the filing as compared to the previous year. The trends of last five years in respect of patent applications filed, examined, granted and disposed are given below. Disposal of applications includes patents granted/ refused by the patent office and also applications withdrawn and abandoned by the applicants.

The total number of patents granted during the year was 9,847 out of which 1,315 were granted to Indian applicants. The number of patents in force was 48,765 as on 31st March 2017, out of which 7,660 patents belonged to Indians. Out of the total granted patents, 2,673 patents were granted to applications relating to the Chemical and related fields, 1,939to Mechanical, 1,049 to Computer Science and Electronics, 805 to Communication, 551 to Pharmaceuticals, 579 to Electrical, 333 to Biotechnology etc.

Chitkara University has positioned above the National Institute of Technology (Collective) in Top 10 Indian Applicants for patents from Institutes and Universities. 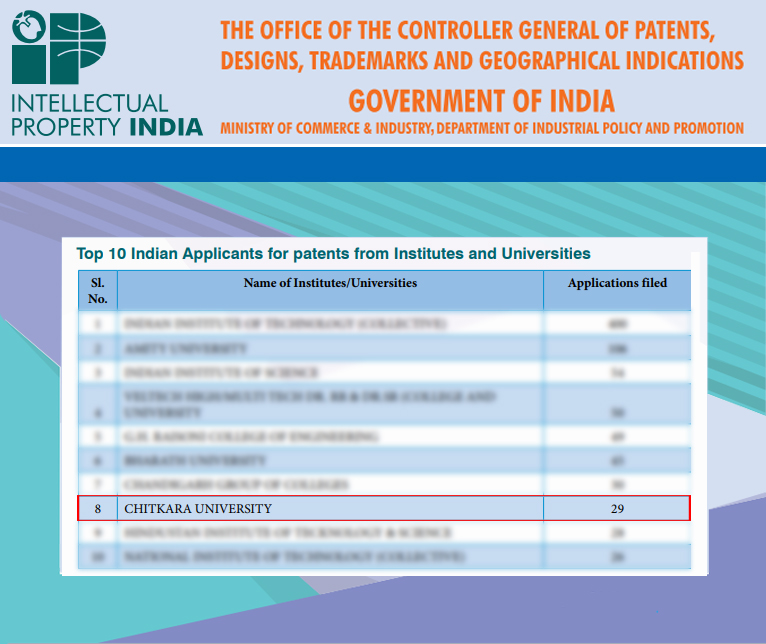