UDAAN-National Media Festival 2021 was organized by the students of MAJMC and BAJMC final-year. The Fest will commence on November 16th, 2021. Dr. Ashutosh Mishra, Dean, Chitkara School of Mass Communication, provided an update on the occurrences. Dr. Madhu Chitkara, Pro-Chancellor, graced the inauguration and expressed her best wishes to all attendees. On the first day of the Media Fest, five activities were organized. This included a quiz, a radio presentation, a TV report, documentary filming, and photography.

The RJ Hunt witnessed the participation of 17 candidates from 17 media colleges. They presented their connection live on community radio, Radio Chitkara, Punjab. They revolved around topics relevant to the United Nations Sustainable Development Goals (UN SDGs) with social impact.

Around 8 documentaries were also broadcasted, covering a wide range of topics such as language, tourism destinations, national pride, heritage among others. Six activities relating to the media discipline were hosted by the students of Chitkara School of Mass Communication on the second day of the festival. Seven media departments submitted their students’ work in “Addition”, the audio-visual advertisement contest, which was screened in Pulitzer Hall. The judges engaged virtually with the students who created these commercials to evaluate their contribution and execution.

The submissions of the participants in the “Self I” event were assessed online by professionals. In the Layout Mania Page Design competition, 12 contestants built newspaper pages using the supplied content, advertisements, and headlines and submitted their work online within the time limit. They primarily used Quark and In-Design software for this, which is used by the majority of print publication houses.

Around a dozen students from media institutes throughout the country took part in the Scribble Pad event and created their stories using assigned phrases.

In the TV news reading event “News Flash,” 15 participants were linked live and read the title and elements of the article as professional presenters using a teleprompter, which was controlled from our end.

The last event on the second day of the fest was “Tooncature,” in which participants created cartoons based on provided briefs relating to the Sustainable Development Goal of environmental conservation and utilising things wisely and sparingly, as well as the need for recycling to safeguard our mother Earth.

Dr. Madhu Chitkara welcomed all participants and winners on the last day of the fest on November 18th, 2021. In her video message, she emphasised that participating, in any event, is more significant, and that this festival provides several opportunities to demonstrate skills in the media field. During the online award-giving ceremony, Dr. Ashutosh Mishra, Dean, Chitkara School of Mass Communication, remarked that the event was successfully organised by the host students under the mentoring of teachers and staff from Chitkara School of Mass Communication.

Symbiosis Institute earned the most points (with more first places) by securing first place in three events and second place in one event. The institute was declared the champion and received the overall trophy. DAV College for Girls, Yamunanagar secured the second position with five spots.

Tanya and Maroof, students from the Postgraduate and Undergraduate departments of Chitkara School of Mass Communication hosted the closing ceremony. More than 250 students participated in 11 events and the top two were awarded in a virtual prize distribution ceremony. 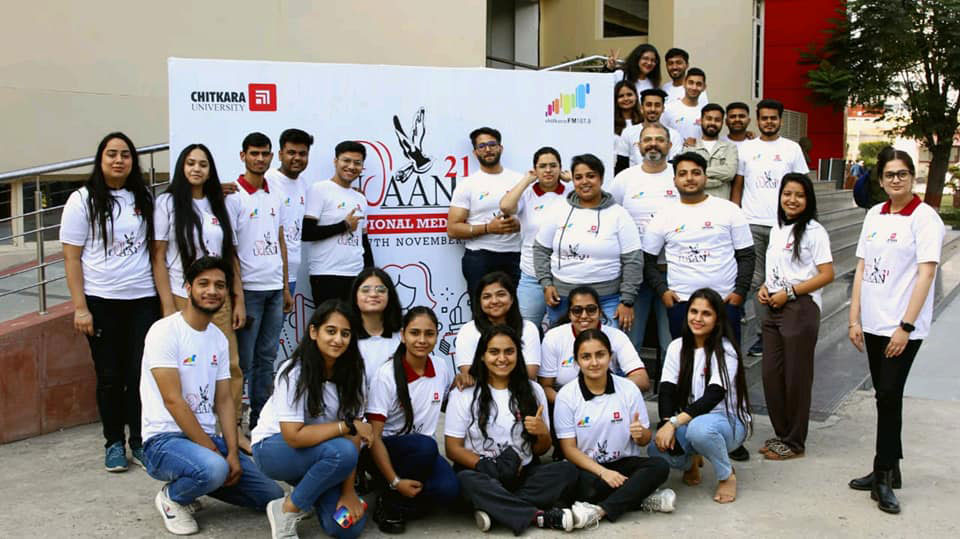