He’s one of the world’s most admired names in fashion design. He’s also a fierce activist for social causes, an eco-warrior and author. Meet, Wendell Rodricks, Padma Shri Awardee, 2014; and recipient of Chevalier de l’Ordre des Arts et Lettres (Knight of the Order of Arts and Letters), 2015; who was recently at Chitkara University, Punjab campus, to interact with students on August 29, 2019. Both a pioneer and a revivalist, the couturier is one of the rare fashion designers who have been bestowed with Padma Shri.

Wendell has made more than a mark on the fashion industry. His first collection from Goa earned him the title ‘Guru of Minimalism’ and his following collection in 1995 pioneered the concept of ‘resort wear’ and ‘eco-friendly’ garments at a time the words were not yet coined in India. A designer with an international presence Wendell has presented his unique garments, inspired by Goa and India, at major fashion events. Wendell has the honour of being the first Indian designer to be invited to show at the World’s largest garment fair IGEDO in Germany in 1995, followed by many other prestigious fashion events. Wendell has also, been a part of the Khadi Movement, and even promoted it at the world’s largest organic fair, BioFach, at Nuremberg, Germany, in 2011.

Wendell’s work has involved a wide range of fashion—from lecturing on world costume history to fashion journalism and styling for international advertising campaigns. This year, after many years of research, painstaking renovation and curatorial work, Wendell is set to open his beautiful 450-year-old ancestral home, ‘Casa Dona Maria’ in Colvale, as the new ‘Moda Goa Museum and Research Centre’ — a museum dedicated to Goan costumes; the first of its kind in the country, and possibly the only one in the world!

Interacting with Chitkara University students, Wendell spoke about following one’s passion – and how he followed his. Wendell studied Hotel Management and worked in the hospitality industry for six years, before studying Fashion Designing in the U.S. and France from 1986 to 1988. He returned to India in 1993. “I was a bright student. My mother wanted me to become a doctor or a dentist! But I said a big No. So I joined the catering and hospitality industry as it was very glamorous, but later discovered my passion in the fashion industry.”

The flavours of Goa coupled with Indian geometry define Wendell Rodricks. Goan at heart and ‘by design’, Wendell feels there’s an inspiration at every corner – an open field, a coconut palm, the ripple of water, or the swaying of trees. Talking about his design philosophy, he said, “My design philosophy is based on ‘minimalism’ inspired by Indian Geometry, Yoga, Ayurveda and Indian Gods.” He suggested that the students take inspiration from “their roots” – traditions & culture, celebrate Indian-ness, and bring out their ‘soul’ in the collections. “No one could get better the essence of Kashmir other than Rohit Bal, West Bengal than Sabyasachi, and Goa than Wendell Rodricks!” he added. During the all-engaging talk, Wendell also divulged some of his management strategies & tips for the budding entrepreneur. He also spoke about the need to create a social impact through work.

Hon’ble Dr. Madhu Chitkara, Vice-Chancellor, Chitkara University, said, “We’re delighted to welcome Wendell Rodricks to Chitkara University. Our students are extremely lucky to get an opportunity to interact and learn from the original vanguard of Indian fashion – a mentor and teacher to several youngsters, and also an author on fashion history, who takes inspiration from his own culture, heart and soul, to stand out from the rest of the world.” She added, Chitkara University takes special care to invite prominent industry experts, to give the right direction and inspiration, in order to get our students future-ready.

Ambitious Chitkara University students were super excited to meet the multi-talented designer, and were spotted posing questions down to – how to create an impressive portfolio, what are the skills required, apt training, technical knowledge, networking – all relevant to their future career goals. As a true advocate of fashion democracy, Wendell finished with encouragement for students to be their own personal stylist and enjoy fashion. “Use your DNA, work originally, work for your country & state,” he said. On a more personal note, Wendell shared that he makes it a point to practice charity for three hours every week – in any way, shape or form. 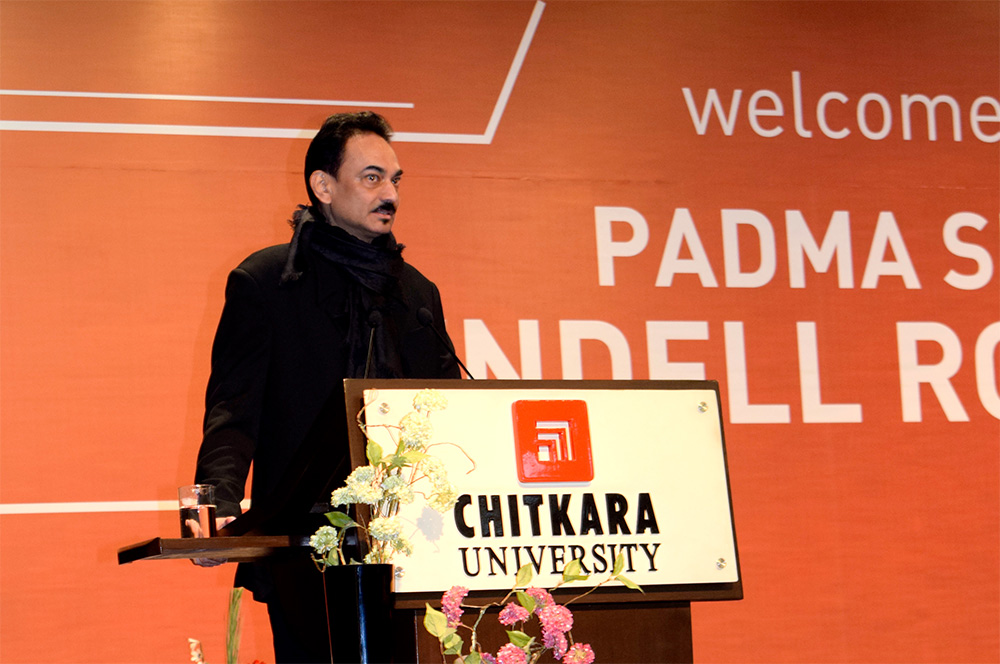