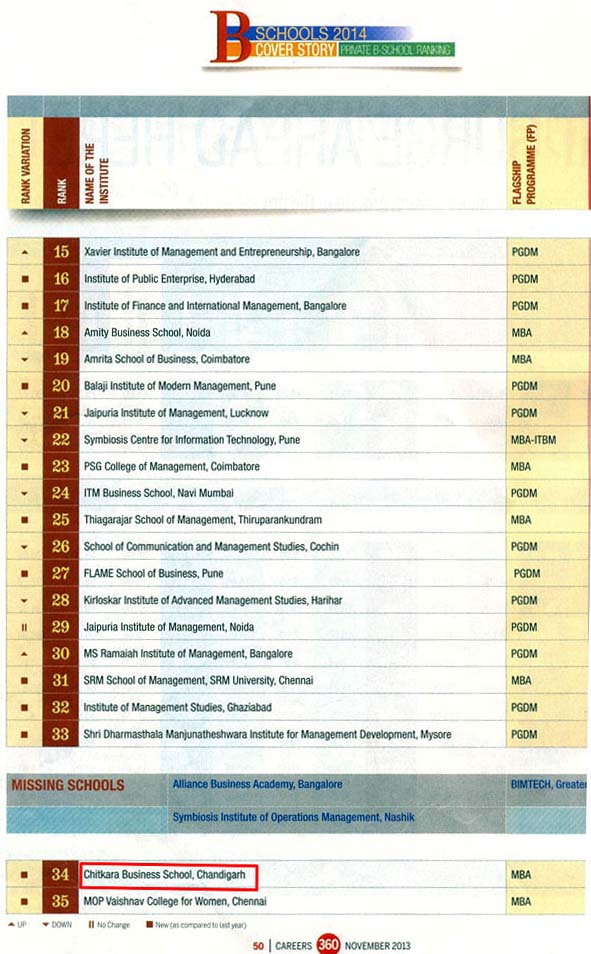 We take pride in sharing that Chitkara Business School is ranked 34th among top 70 Private B-Schools of India by Best B-School survey 2014 conducted by Careers 360. The credit definitely does to interminable efforts put in by the management, staff and faculty of Chitkara University.

Vice-Chancellor, Chitkara University, Dr Madhu Chitkara, has always yearned to carve a niche in education sector and with her determination and valuable guidance to everyone at the University, her vision has become a reality. We are grateful to her for her unrelenting support.

With rating of AAA in the survey, Chitkara Business School stands at 64th rank among Top 100 B-Schools of India, including private and public B-Schools.

The first Careers360 B-School Ranking came out in February 2010. The Careers360 team underwent a meticulous chore of visiting the campuses and reviewing the same.

Encouraged by the constructive and fervent reaction from the MBA aspirants and the management sorority, the Careers360 B-School Ranking Survey has now turned out to be a yearly event.

Dataquest-IDC-NASSCOM Survey: India’s Best T-Schools – To the FORE at THIRTY-FOUR